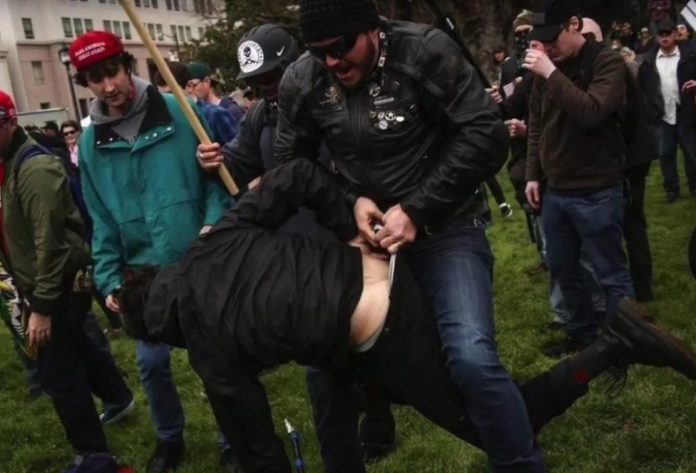 (Or how violence became acceptable in political debate)

On the 15th of April, the American right held a meetup with a group of journalists, bloggers, and other ‘independent media’ in Berkeley, which quickly descended into a street fight with Antifa. In any other time, it wouldn’t have deserved a last page mention – Americans have been fighting ever since Trump declared to run for POTUS. However, this scuffle, best known for an Antifa dudette who took a fist on the nose, has been a turning point for the American right.

The late Andrew Breitbart once said that “politics is downstream of culture”. By his logic, if you want change, you first need to convince people to that change, and change the way they think. Unfortunately, the American right had lost its battle for culture. 90 percent of the U.S. media is leaning heavily to the left, with Hollywood being such a prominent example of the trend that it requires no comments. Ditto most best-selling books in America, etc. A tragedy on its own.

Have you seen Machete by Robert Rodriguez? Remember that right-winger politician starred by Robert De Niro? That’s right. This is how the half of the right has been painted in the American culture for years: with figures of ruthless, immoral politicians who spew bluenose slogans while scheming on how to get just a little more of power and money. What about the other half of the right in this picture? They are the ones who vote for the politicians like De Niro’s character, and exactly like his henchmen: rednecks who carry assault rifles even to a Sunday mass and dream of lynching blacks and Latinos. And screw their sisters, of course.

Okay, Machete seems like an extreme example, since Rodriguez has never been much into subtleties; however, it has been the prevailing image of the U.S. right for years, and the actual American right has been stuck with it like in a trapped animal. For years, the American conservatives and right-wingers have been trying to convince the public that even if they aren’t as kind-hearted as the Democrats, they aren’t as bad as their predominant stereotype. And so, they were confined to the stereotype fabricated by the American left: “Abortion? Sure, it’s an inherent right of women, but maybe killing 9 months old unborn children is a bit too much?” “Benefits? That’s right, we should care for the disadvantaged and the marginalized, but should we really give them so much that they make unemployment a habit?” “Healthcare? Well, yeah, the government should care for the wellbeing of fellow Americans, but perhaps let’s not overregulate the market and keep medical services profitable!” And so on, at nauseam.

And then came Trump with his presidential campaign.

The American right (and unless I say otherwise, I mean those movements a little more to the right than the regular conservatives) did not like Trump at first. Who was he to them back then? A former Democrat, a pal of the Clintons, a man whose political views were simply unclear. No, the American right wasn’t sold to Trump in the beginning. Even when he finally began gaining in the polls, the American right popularized a theory that Trump was planted by Hillary Clinton to get nominated by the GOP only for a theatrical bust in the elections to let her win.

And then the American right had a change of heart, and a spectacular one: where distrust once reigned, a religious devotion to Trump emerged. What happened?

I was paid my first linage for an analysis of who Trump was and why he wanted to be the president of the USA in the first place. I would closely follow his race, and when the support for Trump finally began to grow among the U.S. right-wingers, I asked many of them a simple question, “Why?”. The answer was always the same: “Trump simply speaks his mind”.

What did he speak of? Well, anything nearly all right-wingers think and had been afraid to put in words: for example, at a rally on his campaign trail, he nearly flat out said that the 2nd Amendment was not written to let Americans shoot targets or deer, but to shoot the government, if need be.

And even if Trump’s statements were only what his campaign advisers told him to say (and that, in my honest opinion, was most probable), they were a breakthrough for the American right. Finally, a politician emerged who started saying how things really were, raw and without embellishment that would make facts of reality sufferable to the left; finally, a man stepped forward, threw all the right-shaming through the window and said, “I’m conservative, a right-winger and proud!”

And it worked. Trump, a candidate whose odds had been gauged at 1% in the polls, a runner-up with the mainstream media and a bipartisanship effort against him, became the president of the United States of America. Not without a great help of the American right and its efforts he did, including the famous Meme War, which simply was an election campaign ran free of charge on the Internet by hundreds of thousand volunteers.

Fast forward: on the election night, the largest U.S. broadcasters announced Trump’s victory, more often than not in voices literally shaking with despair. And this is when the American left, the liberals, went on a rampage with grief and shock.

Enter Antifa: a rather fringe far-left movement at the time, and the one which began resorting to physical violence in the wake of Trump’s victory. Not that Trump’s supporters did not fell victims of violence before, no; these, however, had been grassroot incidents, or at least they had seemed to be. What Antifa did was they began promoting physical violence as a form of protest. The left-wing of the Internet got stoked and self-righteously argued that “Captain America beat the crap out of the Nazis!”, “Punching Nazis is an American pastime!”, “Beating Nazis is cool!”. And what is a ‘Nazi’ in the liberal dictionary? Anyone who is not a brain-dead leftist.

The reaction of Trump’s supporters to violence against them was incredulous: they let the liberals and the leftists beat the crap out of them unchallenged. The right-shaming still worked.

And this is how Berkeley happened.

Do I need to explain the political climate at Berkeley?

The first major street brawl broke out at Berkley in February 2017, when the young Republicans of UCLA (yes, there actually are young Republicans at UCLA, and with incredibly hot female members—but I digress here…) invited Milo Yannopoulos to do a speech at the uni. Antifa responded with a riot so furious that the Berkeley campus almost went up in flames, and UCLA had to cancel the event. The next big fight happened on March the 4th, when a Trump rally was held, and this is when everything began to change.

Because on that day, one Kyle Chapman, a.k.a. Based Stickman, was in Berkeley, and he knew quite well what to do with an Antifa punk who tried to punch him. So, instead of trying to calm things down and not prove to the world that the right-wingers are brutes, the Based Stickman simply whacked the Antifa punk’s empty skull with a thick wooden staff.

This was exactly the turning point. Because Kyle Chapman, once an anonymous nobody, has instantly become a hero who has proven that, all in all, Antifa was right: Punching fascists is fun indeed.

Ever since Based Stickman’s grand appearance, similar incidents avalanched in numbers: some Antifa member got a not-so-proverbial elbow in the ribs, some other Antifascist was baited with dogs. And so on.

Finally, the American right held the Patriots Day: an outright ambush on Antifa.

Actually, no one has admitted that the Patriots Day in Berkeley had indeed been a trap. Let’s be honest here: this event could have been held in any city in any of the other 49 states; not in Berkeley, the proverbial nest of vipers. I highly doubt it that people from all over the USA rallied at Berkeley only to attend lectures and panels by low-grade alt-righters. After all, you can simply Google up Lauren Southern’s tits if you want to, right? No, the American right rallied at Berkeley to do one thing only: punch the ‘anti’-fascists, and everyone knew that Antifa would not sit the Patriots Day out without a riot.

And when the riot did begin, the right wing was far from turning the other cheek.

“The Antifa wants a fight? We’ll give’em one so good they’re gonna run bloody snot down their Marx t-shirts!”

And it was so. Antifa was literally clusterfucked and driven out of Berkeley, and Trump’s supporters were drinking to their victory at the local bars till the morning light.

That was the end of right-shaming: “They don’t let us meet up at unis or in the streets? Well, we’ll be meeting anyway, and if they want some, we’ll cry Havoc! and let slip the dogs of war!”

So, Berkeley was just the beginning, and the ‘real fun’ is yet to begin.

The American left, the liberals, are here to blame. They have made street violence acceptable in political debate. And the fact that blue collars, bikers, or military veterans—a great share of those who fill the ranks of the American right—have proven themselves to be vastly superior to the spoiled kids from rich white suburbs at beating the shit out of people in street riots?

Well, who could have guessed that?

***
Translation to English by Jędrzej Ilukowicz.