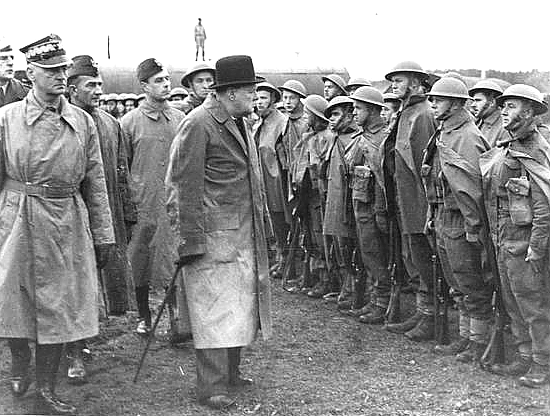 8th June 1946. On this day thousands of people from all over UK took to the streets to celebrate victory over Germany and Japan. Soldiers from all armies which participated in this, to quote FDR, Great Crusade, marched proudly on London streets. Brits, Americans Anzacs, Greeks, French, even Ethiopians.

One nation was missing. Soldiers of one army, which fought Nazis for the longest time, were not allowed to march, despite a quarter million of them serving under British command.

When the Great War was finished, Poland emerged from it’s ashes as an independent country after 123 years of occupation by it’s neighbours. During the Versailles conference Britain was more or less indifferent to ‘the Polish question’ and it’s prime minister, David Lloyd George was strongly opposed to granting Poland Silesia and it’s industry. This indifference between our nations continued up untill Nazis took power over Germany.

On 31st March 1939 UK guaranteed Poland it’s independence. 25th August both countries signed an alliance, similar to that which Poland signed with France much earlier. In a secret protocol both countries agreed to help each other if the Germans attack.

Before that happened Poland already made an important contribution to the future British war effort. In 1932 Polish mathematicians managed to crack the Enigma code – something that was deeemed impossible by the British intelligence. On 25th July 1939 one Polish-made Enigma and all the necessary information was given to the Brits, allowing them to crack future versions in Bletchey Park.

Ability to read Enigma cyphers was, by far, the most important asset the Brits had in the Second World War. It allowed them, among others, to coordinate their defences against German bombers and hunt down German U-boots which threathened the maritime lifelines of British Isles. Enigma was so important that Churchill decided to sacrifice Coventry, along with more than half thousand souls, so they would not suspect that it’s code was broken. And Poles gave him this secret not asking for anything in return.

1st September 1939, about 4:43 in the morning, German bombers dropped bombs on Wieluń, a small city in central Poland. It was devastating – 95% percent of buildings, including a hospital, were destroyed and more than 2 thousand people died. 2 minutes later the rest of German army crossed the Polish border, starting a conflict that would cost Poland 6 milion people and decades of foreign occupation, first German and then Soviet.

According to the pre-war agrement, Britain and France declared war on Germany two days later. In Polish cities people, upon hearing this, danced and cheered on the streets. Everybody believed that Germany, with the majority of it’s forces busy in Poland, will have no chance against a combined French-British offensive and the war will be over in few weeks tops.

We all know how this played out.

Despite this betrayal and losing the September campaign, Poland never surrendered. Polish government moved to London. Along them tens of thousands Poles made their way to the British Isles. Not to beg for protection and asyllum – but to fight with the common enemy, along their British allies.

One of the first groups that reached ‘the Island of Last Hope’ were pilots, ordered to evacuate when Polish Air Force lost all it’s planes. RAF wasn’t exactly enthusiastic about letting them fly, believing German propaganda and thinking, that after losing in 1939 they were demoralized. But German pilots killed so many RAF members, that they had to send barely trained teenage pilots on suicide missions – so they finally decided to give Poles a go. And boy, they were impressed. As it turned out, Polish pilots started dropping German planes from the sky like it was nothing. 303 Squadron became the best squadron of the Battle of Britain, destroying 55-60 German planes in 17 days, almost three for each one they lost.

Pilots weren’t the only Poles that took part in the war under British command. Narvik, Tobruk, El Alamein, Arnhem, Monte Cassino, Normandy – it’s hard to find a significant battle in the western front in which Polish soldiers didn’t spill blood along their British brothers in arms. The vast Polish ‘Underground State’, which had about half a million members, provided crucial intelligence, including a crashed V2 rocket smuggled to England. And so on.

Poles were loved by Brits and it seemed that the common tragedy and struggle would form bonds of a really strong friendship between both nations. But politics interferred. In February 1945 during the Yalta conference Churchill agreed that Poland will become a part of the Soviet sphere of influence – despite the fact that when Poles started fighting alongside Brits Soviet Russia was still an ally of the Third Reich. He also agreed to Stalin taking a significant part of eastern Poland.

History is ironic sometimes. Post-war eastern border of Poland became really close to the line which was proposed by British lord Curzon in 1920, when most Brits believed Poland is going to fall under Soviet agression.

We do not ask Brits for compassion. We don’t ask them for reparations or even for a simple ‘Sorry chaps’. All we want is for them to know the truth about our alliance and the betrayal that caused a rift between our nations.

After the war was over some people and organisations tried to slander Poland. Despite the fact that Poles were the first victims and suffered losses that would break any other nation, despite the fact that even though it was on the side of the victors it lost it’s freedom and became a quasi-independent socialist state under Russian control, there are people who try to shift the blame for IIWW on Poland. Despite the fact that Poland was the only occupied country which never had a government that collaborated with Germany, there are still people who try to frame us as Nazi allies. You would be shocked how often it happens.